The Deluxe Survival Emergency Kit Contains:
MAYDAY REFLECTING TRIANGLE - Sets up in minutes. Can be seen even in bad weather conditions.

FOLDING SNOW SHOVEL - This Chrome Plated, 37" three-piece shovel can be a lifesaver when tiring to dig out of a snowstorm. The three pieces assemble in minutes and snaps together with push button locks.

12 ' JUMPER CABLES - These heavy-duty 6 gauge jumper cables provide enough current flow to jump start in the coldest conditions.  Powerful jumper cables.  These are the good ones.

REVOLVING SIGN LIGHT - This 12V light has a magnetic base and plugs directly into your cigarette lighter. The light revolves and be seen 1 mile away.

TOW ROPE - Tows up to 6500 lbs. Great for getting out of bad situations that require a tow.

HIGH VISIBILITY YELLOW HIGHWAY BLANKET - Can be used as a blanket for injured that are in shock. Also makes good ground cover for changing a tire.

SAFETY VEST - Neon mesh vest with reflective stripes. Perfect to be seen day or night by other vehicles. One size fits all.

The DisasterNecessities name provides you protection, safety, and security with dedicated customer service!
LOW PRICE GUARANTEE!  WE WILL NOT BE UNDERSOLD!

Here is my first published novel! 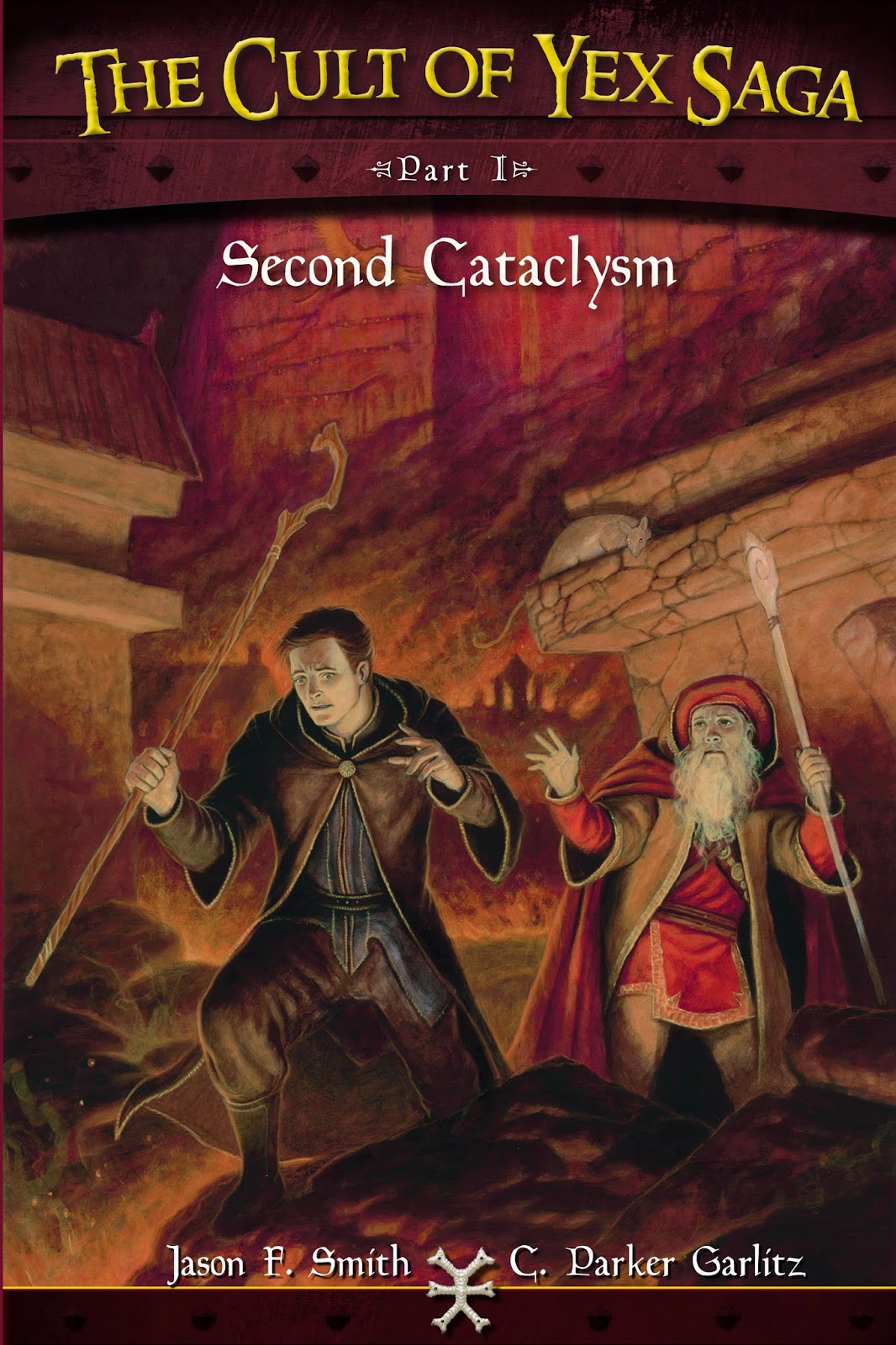 http://www.amazon.com/Cult-Yex-Saga-Second-Cataclysm-ebook/dp/B00QMIH5UC
Posted by Unknown at 1:50 PM No comments:

Homelessness and poverty in the America

From our friends at Survival Cave Food:

Homelessness and poverty in the America

The numbers are rising and the efforts are shifting! Help someone in need!

How do we define homeless?
A person who is homeless does not have a fixed, regular and adequate nighttime residence. This person may be sleeping on the streets, with friends or family, in cars or abandoned buildings or in shelters. Approximately ten percent of the homeless population lives on the street.
What causes homelessness?
Poverty from a lack of jobs at competitive living wages
A lack of adequate public supports and/or earned benefits
Lack of affordable housing and inadequate housing assistance
Lack of affordable health care
Domestic violence
Mental Health challenges
Substance use
Race percentage %
Hispanic              1.32%
Black     51.55%
White   6.64%
Several Races    1.04%
Unknown            38.9%

Behavioral Health
Many people experiencing homelessness have mental health challenges and substance use issues. Barriers to quality physical and behavioral health services make it difficult for these individuals to find appropriate care.

Other interesting facts:
-Families comprise nearly 40% of all who are homeless.
-According to the 2010 US Conference of Mayors report, Family homelessness increased by 9%.
-68% of the cities reporting in the 2010 Mayor's Report had to turn away homeless families with children because of a lack of available shelter beds.
-Among families who are homeless with children, the majority cited loss of a job as the cause, followed by the lack of affordable housing, poverty, low-paying jobs and domestic violence.
-42% of homeless children are under the age of 6.
-A child is born into poverty every 33 seconds.
-Families with children comprise one of the fastest-growing segments of the homeless population today.
-More than 15% of Americans live in poverty, including one in five children (22%), the highest rate in the industrialized world.
-Almost 60% of Americans will spend at least one year below the poverty line at some point between ages 25 and 75.
-There is no city or state anywhere in the United States where a worker making the minimum wage can afford a fair market rate one-bedroom apartment.
-The cost of rent and utilities for a typical two-bedroom apartment increased 41% from 2000 to 2009.
-2 million additional American children will fall victim to the foreclosure crisis over the next two years.
Age Distribution
Children in families constitute a significant portion of the shelter population on any given night. In 2011 the number of children sheltered in emergency shelters and transitional housing totaled 4,495.
(Includes emergency shelters and transitional housing only)

Gender by % of Total Homeless Population
Female (adult) Male (adult)
31.31%                  38.92%
Female (children)            Male (children)
15.01%                            14.5%
(Includes emergency shelters and transitional housing)
Single versus Family
Single                 Family
53.60%                  46.40%
(Includes emergency shelters and transitional housing)
How do we end homelessness?
-Develop effective solutions for those on the street including targeted outreach and appropriate facilities and services, particularly for persons with substance-abuse and mental-health problems.
-Strengthen the system of shelter and services that enable homeless persons to make the transition to stability and job readiness.
-Provide permanent solutions– jobs and housing–so that people can break the cycle of homelessness and become stable and productive citizens.
-Strengthen homelessness prevention programs so that no one ends up in shelters or on the streets. This includes reinvesting in economically vulnerable neighborhoods; improving the school system; making sure people have access to health care; and providing jobs at a living wage.
If you are unable to donate money or volunteer at a shelter, even a small sack lunch could mean huge difference to someone. Maybe they haven’t eaten in days; maybe they have been eating out the trash. Anyone can end up homeless. Just a string of bad luck and misfortune and you can be in the same position. We are not here to place judgment or lecture simply to reach out and help someone in need. You will walk away feeling good and grateful I promise!

UPS just sent us an email warning that Severe Winter Weather Impacting Deliveries in the Southeast.  With snow, freezing rain, and sleet, including areas of Georgia, Mississippi, North Carolina, and South Carolina.  Travel has become near impossible in some areas, and we’ve just heard that Amtrak has suspended some trains ahead of the winter storm.   We have roads that are empty, about 3,300 airline flights that are cancelled, and some parts of Atlanta look like a ghost town.  This is the kind of storm that only hits once every 20 years.

We’ll be watching and keep up to date on this tragic event in the east. Posted by Unknown at 9:35 PM No comments: 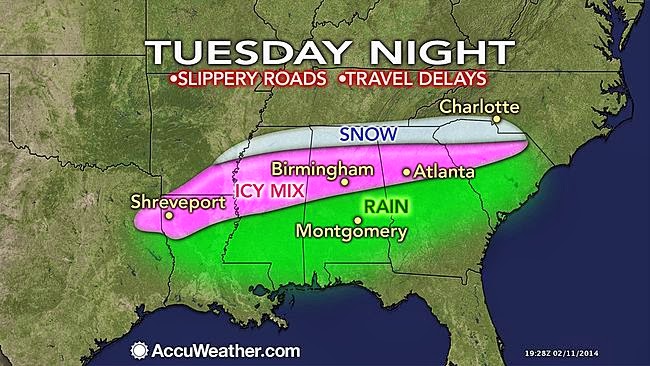 An historic Ice Storm is unfolding in the south this Tuesday night, with slipper roads and travel delays from Texas to Louisiana across Mississippi, and to South Carolina.  The entire state of George is being warned of a ‘catastrophic’ storm.  The storm should move north and last till Friday.  Hundreds of airline flights are being cancelled in the south, and shipping providers like UPS, Fed Ex, and Amazon are telling customers to expect delays. It has been advised that a travel nightmare lies ahead for those trying to fly or drive during this time.  The roads are deserted and many panicked shoppers are fighting over food, water, emergency kits, batteries, and supplies.   Shelves have been cleared as people are expecting extended power outages.  Up to an inch of ice is being predicted.   A crippling ice storm is imminent in the south as they brace for another brutal winter storm.  The storm will reach all the way north to DC, New York City, and Philadelphia. 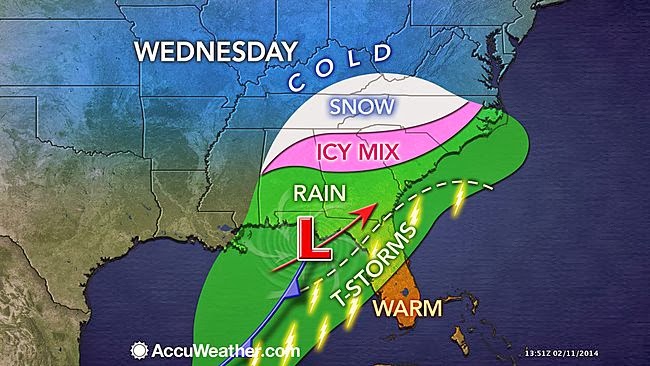 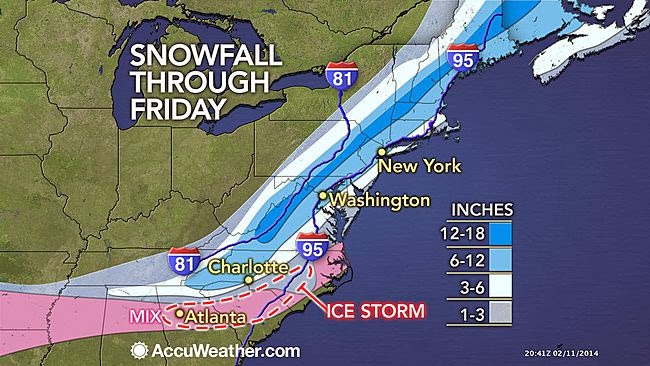 We are currently running a sale on our three best Winter 72 Hour Automobile Kits. 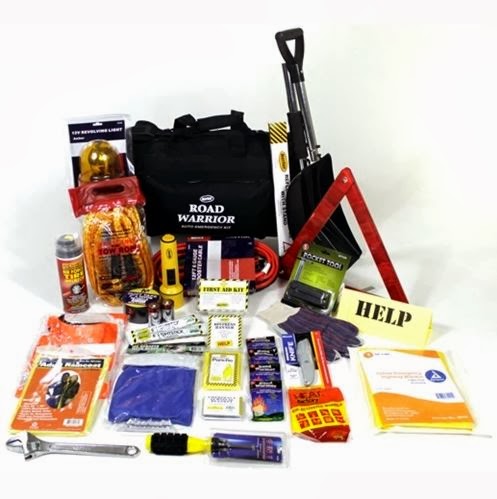 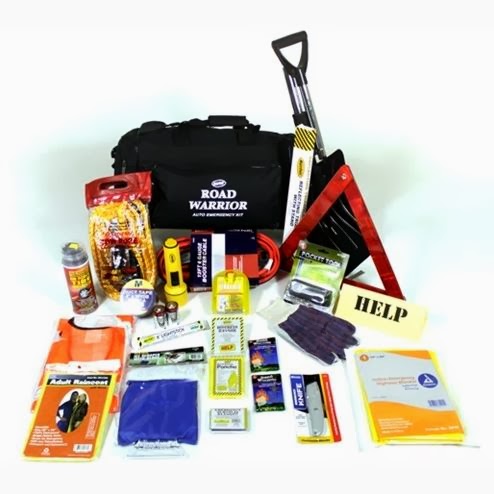 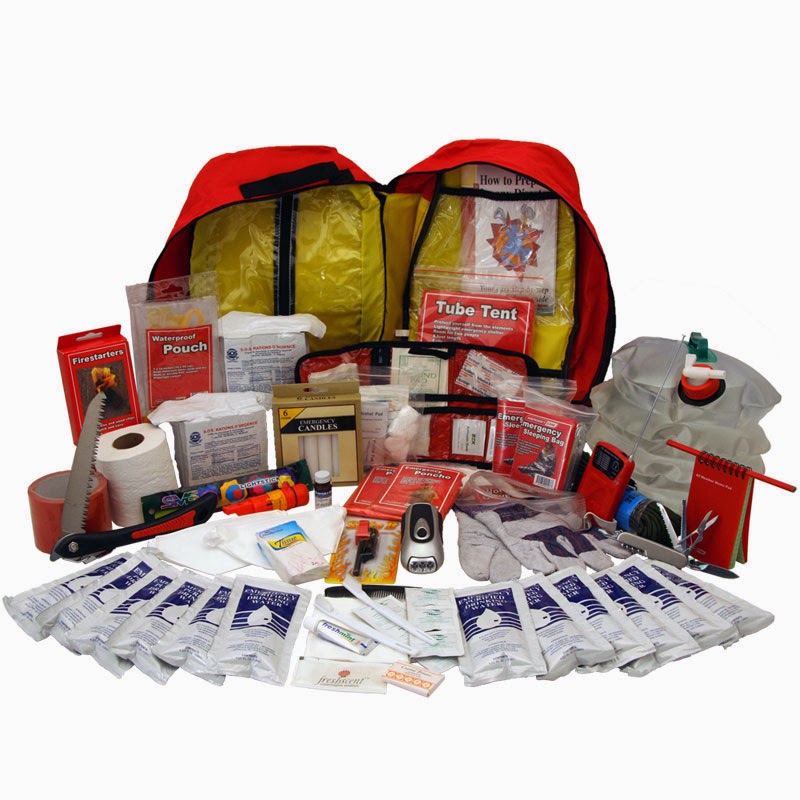 Posted by Unknown at 7:35 PM No comments:

Flu season is upon us

Flu season is upon us

Influenza, or the flu, is a respiratory infection caused by a variety of flu viruses. The U.S. Centers for Disease Control and Prevention (CDC) estimates that 35 to 50 million Americans come down with the flu during each flu season, which typically lasts from November to March and numbers raise usually in January and February . Children are two to three times more likely than adults to get sick with the flu, and children frequently spread the virus to others. Although most people recover from the illness, CDC estimates that in the United States more than 100,000 people are hospitalized and about 36,000 people die from the flu and its complications every year.
Here some myths to help clear the air!
MYTH1: You can catch the flu from the vaccine. The vaccine is made from an inactivated virus that can't transmit infection. So people who get sick after receiving a flu vaccination were going to get sick anyway. It takes a week or two to get protection from the vaccine. But people assume that because they got sick after getting the vaccine, the shot caused their illness.
MYTH 2: Healthy people don't need to be vaccinated. It's true that the flu vaccination is routinely recommended for people who have a chronic illness. But anyone—even healthy folks—can benefit from being vaccinated. Current guidelines suggest that children ages 6 months to 19 years old, pregnant women, and anyone over age 49 be vaccinated each year. In addition, the flu shot is recommended for healthy people who might spread the virus to others who are particularly susceptible. For this reason, health care workers are routinely advised to get the flu vaccination to protect their patients.
MYTH 3: Getting the flu vaccination is all you need to do to protect yourself from the flu.  There are a number of steps you can take to protect yourself during flu season besides vaccination. Avoid contact with people who have the flu, wash your hands frequently, and consider taking anti-viral medications if you were exposed to the flu before being vaccinated.
MYTH 4: The flu is just a bad cold. Influenza may cause bad cold symptoms. But in the United States alone, 36,000 people die and more than 200,000 are hospitalized each year because of the flu.
MYTH 5: You can't spread the flu if you're feeling well.  Actually, 20 to 30 percent of people carrying the influenza virus have no symptoms.
MYTH 6: You don't need to get a flu shot every year.  The influenza virus changes (mutates) each year. So getting vaccinated each year is important to make sure you have immunity to the strains most likely to cause an outbreak.
MYTH 7: You can catch the flu from going out in cold weather without a coat, with wet hair or by sitting near a drafty window.  The only way to catch the flu is by being exposed to the influenza virus. Flu season coincides with the cold weather. So people often associate the flu with a cold, but they are not related.
MYTH 8: Feed a cold, starve a fever.  If you have the flu (or a cold) and a fever, you need more fluids. There's little reason to increase or decrease how much you eat. Though you may have no appetite, "starving" yourself will accomplish little. And poor nutrition will not help you get better.
MYTH 9: Chicken soup will speed your recovery from the flu.  Hot liquids can soothe a sore throat and provide much needed fluids. But chicken souphas no other specific qualities that can help fight the flu.
MYTH 10: If you have a high fever with the flu that lasts more than a day or two, antibiotics may be necessary.  Antibiotics work well against bacteria, but they aren't effective for a viral infection like the flu. Then again, some people develop a bacterial infection as a complication of the flu, so it may be a good idea to get checked out if your symptoms drag on or worsen.
Prevention
The best way to prevent the flu is to get vaccinated each fall with a flu shot or using the flu nasal spray vaccine. The nasal spray is approved for use only among healthy people between the ages of 2-49. The flu shot is approved for use among children over six-months-old, healthy people, and even those with chronic medical conditions. The benefits of the vaccine, however, won't take effect immediately.
And remember if you do come down with the nasty flu, do us all a favor and stay home! Trust me your boss will understand.
Posted by Unknown at 4:38 PM No comments: 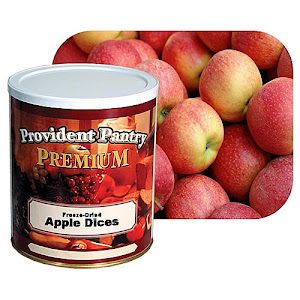